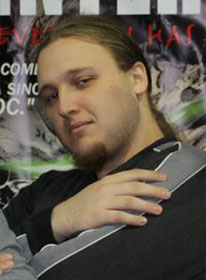 Carl Purcell does not remember being born and may have in fact just materialised out of the aether one day in the early 1990s. Whether or not that's true, for as long as he can remember, he's been a great lover of classic literature, detective stories and comics. For almost as much time, Carl has wanted to be either a writer or Jackie Chan. As it turned out, writing was much less demanding.

Carl finished high school in an age long past and after the whole Jackie Chan thing fell through, Carl decided to seriously focus his goals on writing and one day carve a career out of it. In his tireless practice, Carl has written movie and video game reviews, short stories, essays and political editorials with anarchist undertones. He is secretly breeding an army of novels that he will one day unleash on the world.

Winter City is Carl's first official writing credit and he is very happy to have come this far.

By day, Carl is a university student studying English linguistics and literature and works part-time in Children's Services. He owns a pretty nifty hat and wishes it fit him better than it does.