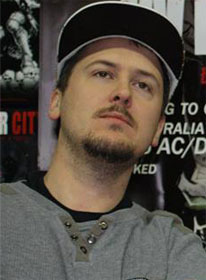 Patrick left college early and started a career in multi-media design and illustration. He soon scored a job at a small, boutique production house with a focus on educational resources. Patrick provided art-work and designs for several web-sites and interactive cd-roms, he was also involved in multiple 2D/3D animated shorts.

Realising the career limitations in the company he was employed by, Patrick resigned and went looking for work in illustration, design or web development with a much larger organisation. He eventually acquired a job as a web tools developer for a large multi-national corporation. After proving himself to be a natural problem solver, a hard worker and team leader, Patrick got his first big break designing and developing a large scale project management and financial tracking web-based application - the multi-year project was an enormous success.

Even though Patrick's career aspirations were always deeply focussed on art, animation, and film, software programming provided him far greater opportunities. Though his days were spent sitting in corporate offices, crunching code, and battling bureaucracy, his spare time was dedicated to drawing comics, writing screenplays and messing around with 2D and 3D animation.

Now after years spent building a successful career in software, Patrick has decide to take a risk by putting his commercial experience to work in an industry he feels infinitely more passionate about - graphic novels. After two years planning... Winter City is finally about to become a reality.

Patrick currently lives in Sydney, Australia with his wife Alison and sons Lucas and Oliver.